This is truly an endless hobby...for every one grave I visit I find five more that I would love to see...from the famous (John Brown) to the semi-famous (Stephen Foster) to the not-so-famous (Estes Kefauver--look him up) and the list goes on and on...and amazingly every time I think that I've come to the end of the people buried within a days trip drive of Nashville, I find yet another trip to make...So on President's Day, I loaded Major up in the car and we headed off.

The first stop on our trip was the Greenwood Cemetery located just outside of Columbia, TN. Columbia is the location of the only still standing residence of James K Polk (outside of the White House of course) as well, as the final resting places of many of his family members. After wandering the cemetery, we located his parents graves, paid our respects and were off again....


Not far from Columbia, and located in a quaint little cemetery at the Zion Presbyterian Church, is located the grave of Samuel 'Rush' Watkins. For those of you familiar with Ken Burn's Civil War, you'll know that Sam's book, 'Company Aytch: Or a Side Show, to the Big Show' was used for examples of the life of a foot soldier fighting for the Confederacy. 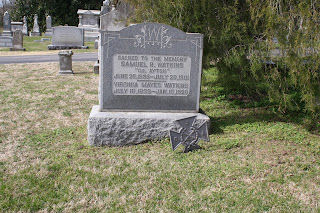 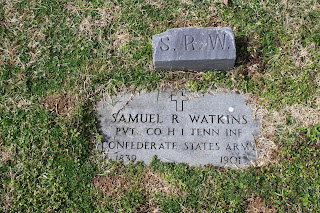 The final stop was the completion of a visit that was set in motion in 2010 on one of hte DPT trips with both Effrin and William. On that trip, we were able to visit the grave of William Clark, of Lewis & Clark fame, and after returning to Nashville was shocked to learn that Merriweather Lewis was buried in Tennessee just about an hour drive from my home. The site where Lewis is buried is on
the Natchez Trace, and is the location where on the night of October 11, 1809, he likely took his own life. 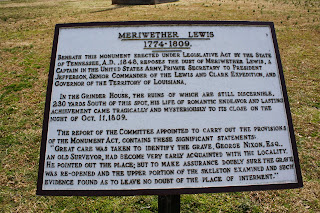 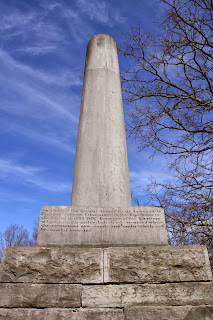 
This is just a quick update as to where Effrin and myself stand in completing our goals to see the graves of the Presidential and Vice Presidential graves and where I stand on seeing the Tennessee Governors graves...

My dad and I have always bonded over movies (and UT Football) There are far too many movies that I remember watching with him to even begin to count. Some that jump immediately to mind, however, are the westerns, Shane and The Cowboys, actually pretty much any John Wayne movie is strongly associated with my dad.  Another movie that made an impression on me was the 1941 classic, Sergeant York.  So when I decided to take my day off of work and make a trip to Pall Mall, York's hometown, I knew that I wasn't going unless my dad would go with me. Luckily, he excitedly agreed!  So I quickly charted out our trip, which to my delight would include a visit to a Governor in nearby Livingston, TN, and we were off! 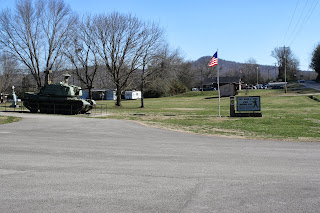 For those of you who don't know the story of Alvin York, I believe that you can get the jest of why he is famous from his Medal of Honor citation which read, "After his platoon had suffered heavy casualties and 3 other noncommissioned officers had become casualties, Cpl. York assumed command. Fearlessly leading 7 men, he charged with great daring a machinegun nest which was pouring deadly and incessant fire upon his platoon. In this heroic feat the machinegun nest was taken, together with 4 officers and 128 men and several guns." If you've not seen the movie, I would highly suggest it, as from all accounts, it was incredibly accurate at telling of York's time before, during and briefly after the war.

Pall Mall is a very small town tucked away in the hills and valleys of north east Tennessee, sitting about ten miles from the Kentucky border. The area is amazingly beautiful and the sites related to York's life remain pretty much as they were while he was still living. Unfortunately, the General Store, which belonged to York, was closed for the winter, but the house where he spent the years following the war was open. The house remains as it was at the passing of his wife in 1984. Amazingly, one of his surviving children, Andrew Jackson York, is actually a park ranger and on hand to answer questions about his father or the house. The grave site is about a half a mile from the house and is well maintained with an amazing view of the surrounding hills. While the town is a bit out of the way if you have any interest in World War I, Alvin C. York or Tennessee, I would highly suggest that you take the time out to visit. 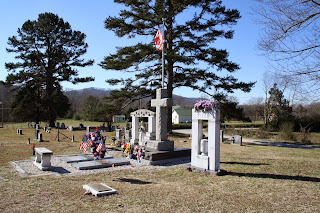 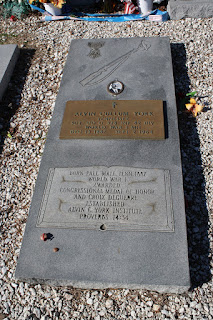 While York was the most famous Tennessean to be involved in World War I, it could be argued that Cordell Hull, who was Secretary of State for eleven and a half years under Franklin Roosevelt, was the most famous from World War II. Hailing from the small town of Olympus (present day Byrdstown, in Pickett County), TN, Hull had an illustrious career, first in law and later in Politics. Serving as a Congressman for 22 years, he was credited with authoring the income tax laws of 1916 and 1918, as well as the inheritance tax law of 1916. Named by FDR as Secretary of State in 1933, he would be the driving force behind the United Nation, and along with his staff, draft the initial charter for this organization. FDR would later call him the 'Father of the United Nation', and after his retirement, due to health issues, the Norwegian Nobel Committee would award him the Nobel Peace Prize for his efforts.
Interestingly, upon arriving in America from his exploits in the War, Alvin C. York was greeted by the then congressman, Cordell Hull. The two would strike up a friendship that lasted their lives. Upon, Hull's death, York took up the banner to establish a museum dedicated to his friend to be located at the site of the cabin where Hull was born which we were also lucky enough to visit on our trip. While the museum is rather small the amount of artifacts that it houses and their historical significance is rather astounding. Again, if in the area, it is well worth stopping by and taking in this location. 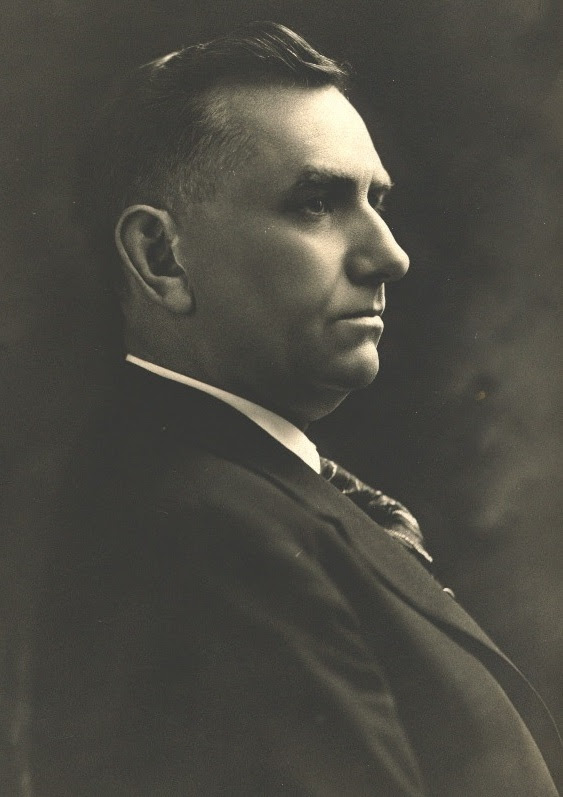 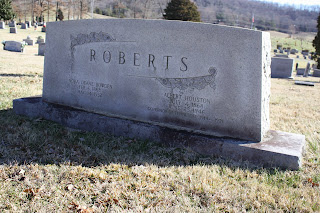 Albert Houston Roberts was born on July 4, 1868 to John and Sarah Roberts of Overton County, TN. At a young age his parents moved to Columbus, Kansas, briefly, but returned to Tennessee, where Albert attended Hiwasee College. He was admitted into the Bar in 1894 and practiced law in, and around, Middle Tennessee. In 1918, he defeated Republican, Hugh B. Lindsay for the Governorship of the state. Coming into the office at a time of mounting state debt, Albert would oversee the overhaul of how taxes were assessed. He would also call a special session to consider ratification of the 19th Amendment, which would give women the right to vote. Tennessee would become the 36th State to ratify the amendment, giving the national government the final state needed in order for the amendment to become the law of the land. The unpopularity of his new tax code, as well as his support for the 19th Amendment, doomed his reelection chances and he was defeated in the election of 1920. Following the election he would remain in Nashville, opening a law practice. He died in Nashville on June 25, 1946 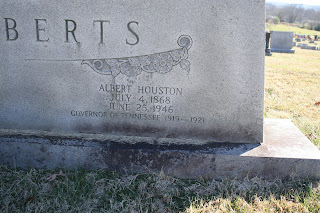 Wow, and with that 2012 starts winding down. It's hard to believe how quickly the year has truly flown and looking back it was May the last time I actually posted a blog. At this point, I'm so far behind that I think the cleanest way to handle this is just post a little blurb about each trip and a few pictures and then try and keep up better from this point out. So here we go...May through December in one blog.

Trip 1: Nashville to Montgomery to Panama City to Selma and back again
In August Major, Amber and myself took a trip to see our beloved friends the Gladstones, who have recently returned to William's hometown of Panama City, Florida. Of course, whenever we go somewhere, much to Amber's annoyance (I love you, Amber, for letting me drag you and Major on these little side trips with me), I look for a few interesting things to visit on both the trip to and from our final destination. On the way down, we traveled straight through to Montgomery, where I was able to visit the grave of one of my all time favorite singers, Hank Williams, Sr., as well as the controversial Alabama Governor/three time Presidential hopeful, George Wallace. I had very mixed emotions concerning visiting the grave of George Wallace, who is as famous for blocking the entrance to the University of Alabama during desegregation than anything else he did, but ultimately decided to make the stop in my attempt to (a) visit all of the candidates that have won a single state in the presidential election and (b) visit as many sites related to the civil rights struggle as possible. On the way back from Florida, we swung through Selma, AL, scene of the Voting Rights March, and the attacks of Bloody Sunday, which took place on the Edmund Pettus Bridge. Also the grave of Vice President William King (Pierce), who was also allegedly the lover of President James Buchanan, and one of the houses where the psychic Edmund Cayce lived. 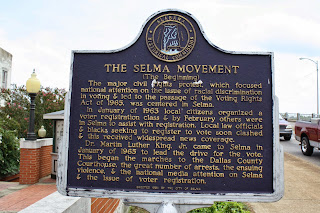 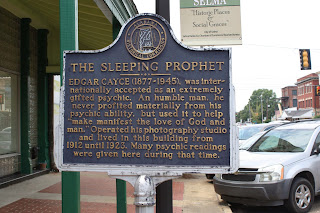 Trip 2: Nashville to Cleveland to Grand Rapids and all sites in between....
This was the annual Dead President Trip (DPT) with Effrin. This trip saw us seeing; 8 Presidents (WH Harrison, Harding, McKinley, Garfield, Hayes, Ford, B Harrison, Taylor), 7 Vice Presidents (Richard Johnson (Van Buren), Schuyler Colfax (Grant), John Breckenridge (Buchanan), Gerald Ford (Nixon),  Charles Fairbanks (T. Roosevelt), Thomas Hendricks (Grover Cleveland) and Thomas Marshall (Wilson) and 2 Presidential Homes (Garfield's Lawnfield & Hayes' Spiegal Grove). We were also able to visit the grave of Presidential candidate, Senator, Congressman, Secretary of State and the man who Abraham Lincoln once describe as his 'ideal of a great man", Henry Clay, as well as the grave of American pioneer and explorer, Daniel Boone.  We also visited the grave of the late-great actor, Jim Varney. It was three days, 28 hours in the car and over 2000 miles traveled....exhausting, but amazing.


Trip 3: Nashville to Fairview and Hopkinsville, KY
This was a quick little day trip that Major and I took when I was off of work and Amber had to work. I'd been interested in seeing the Jefferson Davis Monument in Fairview for several years, but for one reason or another had never been able to make it. This monument was erected at the site of Davis' birth and stands an astounding 351 feet tall and is tallest unreinforced concrete structure in the world and the third tallest obelisk in the world (behind the Washington Monument and the San Jacinto Monument). After our visit to the monument (and some much needed playground time for Major at the park near the monument) we took the short drive into Hopkinsville to visit the grave of Edgar Cayce. 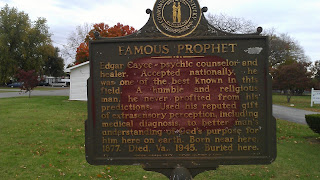